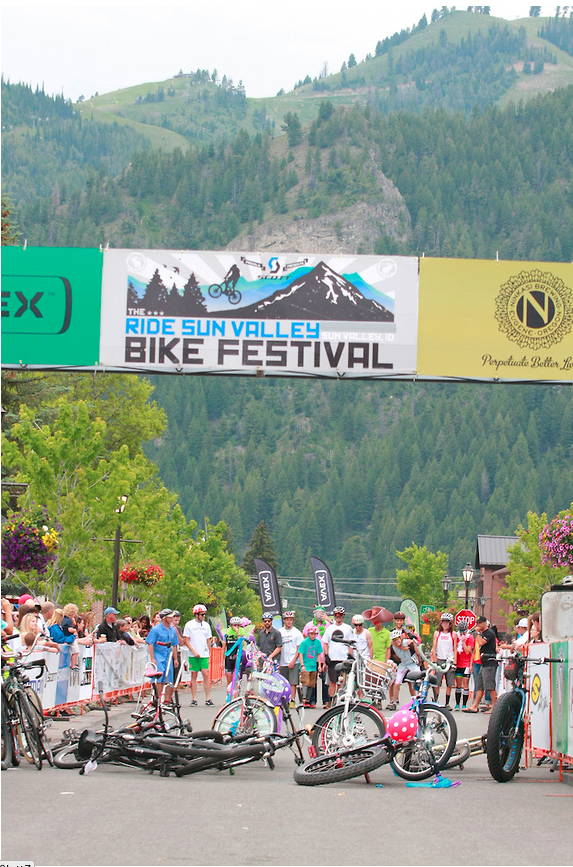 The Le Mans Start of the Team Rally at the Ketchum Criterium. Chaos ensues.

Ride Sun Valley has become a major staple of both the Sun Valley’s summer event offering and the bike festival world as recognized by Outside Magazine.  Spanning two weekends with events ranging from the Shimano Super Enduro to kids racing to pumptrack racing to free guided rides to the US National Championships and all parts in between this is a week which celebrates the area’s 400+ miles of mountain bike trails and the thriving local bike scene. Kicking off in 2013 with the first ever Sun Valley Shimano Super Enduro, Saint Luke’s Regional Medical Center was a little bit busier than normal but with the exception of a few sets of stitches and a broken arm, everyone had a blast.  This new race format sent riders down 4 different downhill courses totalling 11,000’+ of descending and finish times which hovered in the 1:30:00 range making it the longest Enduro in the country.  Using a combination of lifts and good old pedal power, the sum of physical exertion brought notable riders like Geoff Kabush, Mark Weir, Aaron Bradford, and Carl Decker to their respective knees.  But the real story were the unsung amateurs who flocked to Sun Valley like gulls to a loaf of bread gorging themselves on miles of loopy flowy singletrack and cold beers served up by Ninkasi Brewing. Charging down the Bald Mountain Trail to 3,200′ feet below, River Run. Smith Optics Cory Smith finds the redline and holds on.

Maxi looping through the tulips.

This is an event which is as much about having a good time as it is racing your bike.  Just when you thought that the racing was getting too intense someone would step in and tweak an event, like forcing riders to peel potatoes before crossing the finish line, one couldn’t get too wrapped up in the competition.  The vibe and brother/sisterhood of riding emanated profoundly no matter where you found yourself. 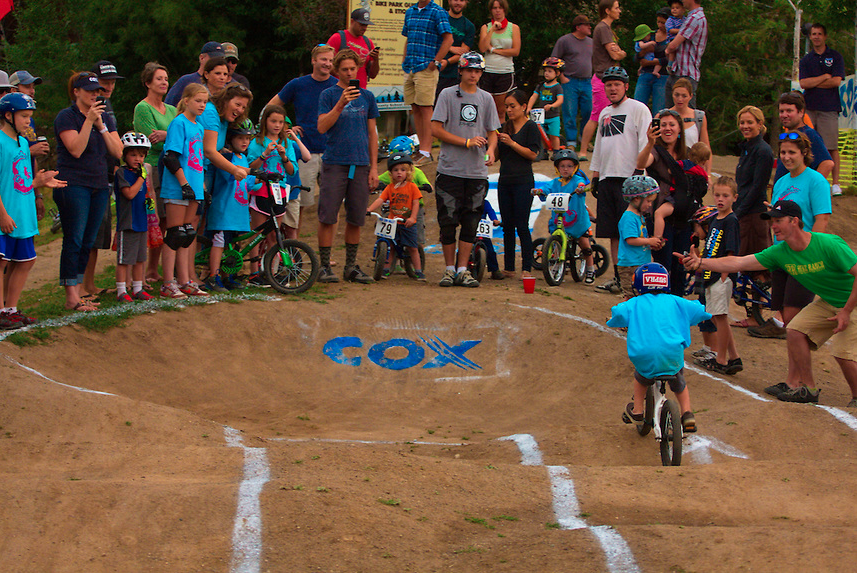 The kids had a heyday with several events geared specifically to their tastes and interests in life, popsicles included.  From the Shimano/Cox Kids Race to the Cox Idaho Pumptrack State Championships moms and dads slapped them with more high fives than when they learned to walk the earth without diapers. No pedals? No problem!

With so much going on it was hard to figure out where to leave off and go home each day.  The week was peppered with criterium racing as well as mountain bike events and visitors to Sun Valley found themselves awash in a sea of baggy shorts and lycra superhero suits.  Each day brought something new and even the 4th of July was celebrated with a bike event, the Hailey 4th of July Criterium. The week culminated in the USA Cycling Marathon Mountain Bike National Championships.  With some of the best racers from around the country in town the level of performance was upped a notch.  To some a death march to others a great day on the bike, the Marathon course circumnavigated Bald Mountain twice leaving many thirstier and hungrier than they had been in years. Throw in some other weird things like an old school skateboard slalom contest (officially the Tank Top Tube Socks Ray Ban Farmer Tan Old School Throwback Dual Slalom Skateboard Competition) and you had yourself one heck of a good time if you were in town.  If you weren’t….well we are guessing you will be next year.