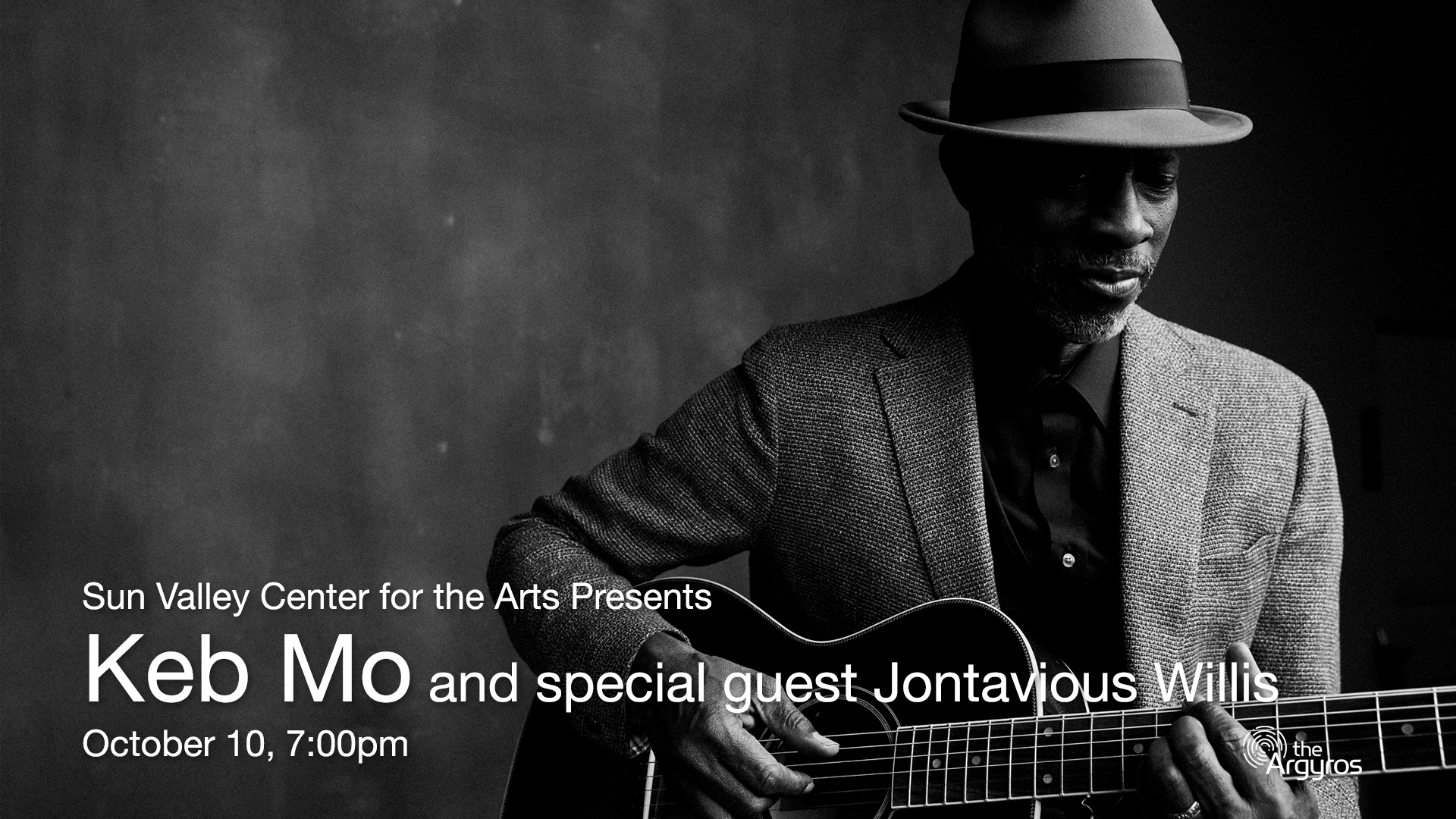 The Sun Valley Center for the Arts is thrilled to announce a special event featuring two incredible blues artists from two different generations — four-time Grammy Award winner Keb’ Mo’ and, opening for Keb’ Mo’, blues prodigy Jontavious Willis. They will perform in concert at 7 p.m. on Thursday, Oct. 10, at The Argyros Performing Arts Center in Ketchum.

Keb’ Mo’s career took off in 1994 with the self-titled release under his newly coined Keb’ Mo’ moniker, and over the years he has proven that he is a musical force that defies typical genre labels. Album after album, 14 in total, he has garnered four Grammy Awards and a producer/engineer/artist Grammy Certificate for his track on the 2001 Country Album of the Year, “Hank Williams Tribute: Timeless.” He has received 11 Grammy nominations in total, including Country Song of the Year for ‘I Hope,’ co-written with The Dixie Chicks, and three for his 2014 self-produced release, “BLUESAmericana,” including Americana Album of the Year. Keb’ Mo’ has also been awarded 11 Blues Foundation Awards and six BMI Awards for his work in television and film.

Over the past two decades, Keb’ Mo’ has earned a reputation as a modern master of American roots music through the understated excellence of his live and studio performances. Artists who have recorded his songs include B.B. King, Buddy Guy, the Dixie Chicks, Joe Cocker, Robert Palmer, Tom Jones, Melissa Manchester, Solomon Burke and the Zac Brown Band, to name a few. The list of artist collaborations comprises a who’s who in the music industry and includes Bonnie Raitt, Taj Mahal, Vince Gill, Amy Grant, Jackson Browne, Natalie Cole, Lyle Lovett, India Arie, James Cotton and many more. His guitar playing has earned him two invitations to Eric Clapton’s acclaimed Crossroads Festival and inspired two leading instrument makers, Gibson Brands and Martin Guitars, to issue special guitar models in his honor.

Keb’ Mo’ has been featured in TV and film, playing Robert Johnson in the 1998 documentary ‘Can’t You Hear The Wind Howl,’ appeared three times on the television series ‘Touched By An Angel,’ and was the ghostly bluesman Possum in John Sayles’ 2007 movie, ‘Honeydripper.’ Keb’ Mo’ created ‘Martha’s Theme’ for the TV show “Martha Stewart Living.” He also wrote and performed the theme song for the hit sitcom “Mike & Molly” and was music composer for TNT’s “Memphis Beat” starring Jason Lee. In early 2017, nine songs from Keb’ Mo’s extensive catalog were featured in the film “Signed, Sealed, Delivered: Higher Ground” on the Hallmark Movies and Mysteries channel. This film was also Keb’ Mo’s first lead acting role in a feature film. He appears in an episode of the CMT series ‘Sun Records’ as Howlin’ Wolf and can be heard playing his original song ‘Operator.’ Keb’ Mo’ has played his iconic version of “America The Beautiful” in the series finale of Aaron Sorkin’s “The West Wing” as well as in the actual White House for President Obama.

In 2017, Keb’ Mo’ released “TajMo,” a collaborative album with legendary blues artist Taj Mahal. The duo went on to tour the U.S. and Europe in support of their album, which earned a Grammy Award for Best Contemporary Blues Album.

Opening for Keb’ Mo’ and described by Taj Mahal as “my Wonderboy, the Wunderkind,” Jontavious Willis grew up in Greenville, Georgia, singing gospel music at the Mount Pilgrim Baptist Church with his grandfather. At the age of 14, he came across a YouTube video of Muddy Waters playing “Hoochie Coochie Man” and set his course on the blues.

In his 2016 debut album, “Blue Metamorphosis,” Willis ranges from Delta, Piedmont and Texas blues to gospel, playing guitar, harmonica, banjo and cigar box. At the age of 22, Willis is an accomplished fingerpicker, flat-picker and slide player. He will complete his studies in sociology at Columbus State University this spring, but he’ll be unable to attend his graduation because he’ll be on tour with Taj Mahal and Keb’ Mo’.

”We are simply overjoyed to be bringing Keb’ Mo’ back to the valley,” said Kristine Bretall, Director of Performing Arts at The Center. “It’s been 13 years since he last took the stage, and that was with Bonnie Raitt, playing to a sold out crowd at River Run! This time, we’re lucky to have snagged him during a tour, and he’ll be playing acoustic guitar in the intimate space of the Argyros. These tickets are going to fly off the shelves, and members of The Center will get the first chance to purchase them. As a bonus, Keb’ Mo’ fans will have the opportunity to see the up-and-coming Jontavious Willis as an opening act. At The Center, it’s part of our mission to introduce new, emerging artists to our community.”