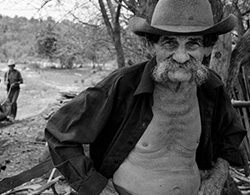 An amateur photographer, who works as a skycap at Salt Lake City Airport, documents for the last 15 years the disappearing way of life of Cuba’s tobacco farmers, forging friendships and capturing dignity and sacrifice through his surprisingly intimate pictures. Whether it’s Modesto, the 101 year old philosophical tobacco farmer with a wicked twinkle in his eye and handlebar mustache that would give Yosemite Sam a run for his money; Giovanni the sweet and charismatic farmer/salsa dancer and devoted practitioner of Santeria; or Lazara photographed by Carl since she was two, who now enters her young adult life in the valley with a passion for physics. Campesino introduces you to a way of life and captivating cast of characters that you won’t soon forget.

Director/Producer Mia Tate will be at the screening and will speak afterwards about the film.

Due to these increasing health concerns, the Sun Valley Jazz & Music Festival will not take place next month. The Festival will be held October 12-16, 2022. Some important details to note about the 2022 event: Total sales are again limited to 1,500 GA passes (day passes are no longer available) Tickets will be available for purchase starting February 1, 2022, for $265 + tax All purchases are fully transferable (gift/sell) to someone else Sun Valley Jazz and Music Festival Five days. Forty Bands. One Million Smiles Attendees from all fifty states, every Canadian province, and several foreign countries gather each October to celebrate live performances of America’s music. The Sun Valley Jazz & Music Festival was birthed out of a love and appreciation for jazz music by Tom & Barbara Hazzard and is held mid-October each year in Sun Valley, ID. Become One of the Thousands of Jazz Fans Who Have Been Delighted Since 1990! This experience of telling the story of “American” music is our passion. Amazing isn’t it? We all get to be part of this history while it’s still in the making. The names that ring through eternity—Armstrong, Ellington, Fitzgerald, Beiderbecke, Goodman, Holliday, Basie, Shaw, Miller, ...
Feb
1
Tue
all-day Zions Bank Boulder Mountain Tour @ Various Locations
Zions Bank Boulder Mountain Tour @ Various Locations
Feb 1 – Feb 6 all-day