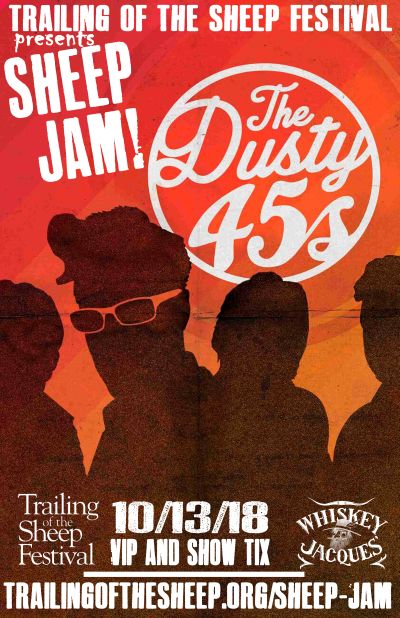 The Dusty 45s have inspired and fired up crowds for over two decades to the delight of fans and critics alike.  With their signature style and unique sound, the band is a consistently powerful and energetic player in the Americana field.  Led by charismatic singer/songwriter, guitarist and trumpeter, Billy Joe Huels, the raucous band tears through Huels’ original songs that draw inspiration from the roots of Rock, Rhythm and Blues, Honkytonk and Jazz.  Current members of The Dusty 45s also include Jerry Battista (lead guitar), Robin Cady (upright bass), Kohen Burrill (drums) and William Stover (piano).  Huels and his outfit have steadily built their fan base since 1997. The Dusty 45s have toured extensively and they backed Rock and Roll hall of famer, Wanda Jackson, multiple times. A highlight with Jackson was when they joined her opening for Adele’s ’21’ tour in 2011. The Dusty 45s have also shared the stage with many other musical greats including, Lyle Lovett, John Prine, Big Bad Voodoo Daddy, Lucinda Williams, Leann Rhymes, Michael Franti & Spearhead, Brandi Carlisle and the Cherry Poppin’ Daddies. The Dusty 45s have released seven recordings.  The 2014 album, “Live and On Fire,” showcases the best of their bold and brassy sound recorded live in Seattle, WA.  Huels is currently working on a new recording, due out in 2018. Ballet Sun Valley proudly presents Boston Ballet on June 24 & 25 in their debut at the Sun Valley Pavilion. Boston Ballet, led by Artistic Director Mikko Nissinen, is one of the top ballet companies in the United States. The company is known for their innovation, excellence and groundbreaking works. The Festival will feature two unique and exceptional performances that span contemporary to classical works and a new work set to music by the Rolling Stones! With something for everyone you won’t want to miss these spectacular performances. Pavilion seating from $35.  Tickets on Sale April 27 at balletsunvalley.org or  (208) 622-2135
Jul
2
Sat
all-day Hailey Days of the Old West @ Various Locations
Hailey Days of the Old West @ Various Locations Edit
Jul 2 – Jul 4 all-day

Celebrate “Red, White & Blue 2022” Join us for the Days of the Old West Independence Day celebration in Hailey The Parade starts at 12 noon. Enjoy the celebration of a classic American parade on Main Street. Local restaurants serve up their specialties, visit the Blue Cow Antique Fair, and three days of Sawtooth Rangers Rodeo  ending with a big fireworks show, it’s no wonder Hailey has been called one of the best places to celebrate the Fourth of July in the West! Hailey Antique Fair:  July 2-4th, 2022 Nothing is more fun than browsing for unique treasures at a well-curated antique show, and the Hailey Antique Fairs have some of the best antique vendors and wares in the region.  You will be sure to find that perfect one-of-a-kind something! This year the Fair will also feature a beer garden and mechanical bull riding. 4th of July Antique Market  (Roberta McKercher Park) Dates/Times: July 2, 3, 4. 9 am to 6 pm Friday/Saturday, 9 am-4 pm Sunday Hosted by Dana Cameron and Blue Cow Antiques Sawtooth Rangers Days of the Old West Rodeo: July 2-4th, 2022  7:30 PM nightly   Rodeo is a proud tradition in the West and in Hailey the Sawtooth Rangers have ...
Jul
8
Fri
all-day Ketchum Arts Festival @ Festival Meadows
Ketchum Arts Festival @ Festival Meadows Edit
Jul 8 – Jul 10 all-day