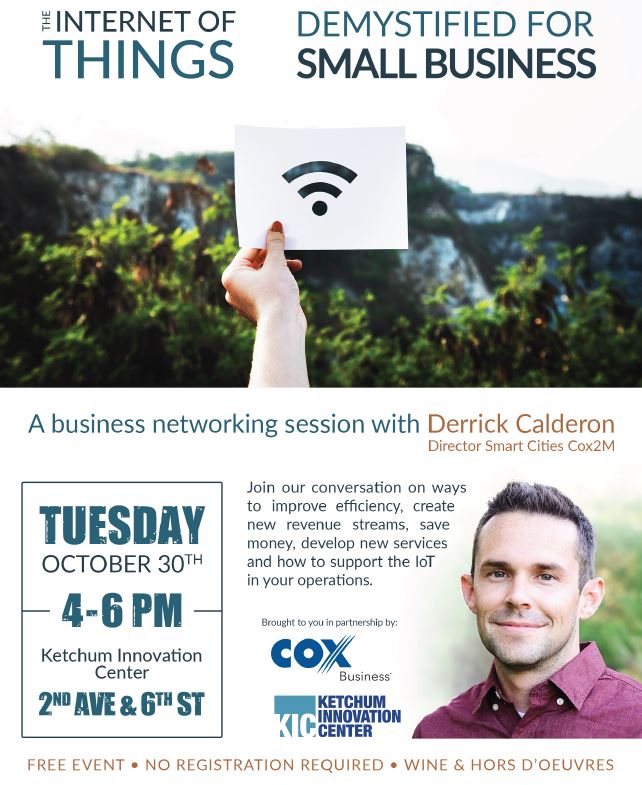 Cox Business invites you to a business networking session with Derrick Calderon. The conversation will center around ways to improve efficiency, create new revenue streams, save money, develop new services, and how to support the IoT in your operations.

This free event will include beer, wine, and hors d’oeuvres alongside Derrick Calderon’s with a Q & A session at the end.

More on Derrick Calderon – Director of Smart Cities, Cox2M:
Derrick Calderon is a skilled business development executive with extensive experience in the wireless telecom and IoT industries. Currently, Derrick is the Director of Smart Cities in Cox’s Cox2M business. In this role, he focuses on enabling Smart City growth throughout the United States, and developing strategic partnerships to build up Cox’s Smart City offering. Prior to joining Cox, Calderon served as VP of Business Development at Ingenu, a provider of Low Power Wide Area Network services, where he led the effort to build out Ingenu’s partner eco-system for the Machine Network. Previous to Ingenu, Derrick created and executed Kore Wireless’s Latin America strategy, which became the organization’s fastest growing division. Calderon has been involved in the deployment of over 50 IoT projects totaling more than a million connected devices. Calderon holds a bachelor’s degree in Finance and Economics from Utah Valley University.