Sun Valley had long been off the radar of the freeski and snowboard movement, the youth and creativity that once defined the original zip code to hang your ski bum shingle had all but evaporated.  But then a rumble was felt and slowly the monolith of the past began to awaken.  A park was constructed on Dollar Mountain and with that came photographers, athletes, film crews and the few locals who had been living the dream woke up to Christmas. Movements are created out of momentum, one significant event sets the dominos in motion.  Which is what is happening in our valley today.  We took a moment to sit down with local photographer, Tal Roberts to view this movement through his work as he captures the product of this momentum. "This shot was taken during the filming for Level 1's "Partly Cloudy" film which came out this fall. Level 1 has been coming here for a couple of years now and killing it for their films. The Sun Valley Terrain Parks guys built this massive hip on Ridge (a popular run on Baldy) and fiddled with getting the transition right. Banks Gilberti eventually just decided to send it straight over the top which was about an 80' air to a really narrow landing. A gust of wind would have been the end of his day but it all worked out. Banks was once a local kid who has come back because of the new park and pipe and all that is going on in Sun Valley which is really cool. I took this shot holding a piece of glass against the lens of my camera which gave it the reflection of the mountains you see on the bottom of the shot." Banks Gilberti on Dollar Mountain in Sun Valley, ID. Shot in one frame holding a glass prism in front of the lens.

"This is another shot of Banks I took while we were shooting an Orage catalog piece at Dollar Mountain just after the Orage Masters event. This shot and another of mine were nominated as "Best Creative Photo" by the IF3 (International FreeSki Film Festival) jury and one of them actually won. I had shot the park so much this past winter that I had grown tired of everything looking the same so I had started experimenting with different things resulting in me actually holding a glass prism like you would get in science class up to the lens of the camera." "Last winter the early snow came in really wet and heavy which is unusual for Sun Valley.  As a result another local kid Ben Parker and I actually got enough to put this shot together up in back of town. It was a cool shot I had wanted to take for a while but had never really had the right conditions.  This urban water tower feature allowed for a lot of different looks and this was one of my favorites. Ben is a really gifted skier and skateboarder as well as up and comer with the camera. He grew up here and is really young with a bright future." "Sun Valley has had a lot of really exciting action coming together the past couple of years and this year with the Orage Masters in town we also shot the 2013-14 catalog for them.  This is just a fun shot in the spring with the snow flying and everyone was having a ball. It's the kind of shot that makes you want to never stop skiing until the last bit of snow has melted off." Wing Tai Barrymore Sun Valley's Air Force is known for going bigger than anyone else.

"There is a lot of talent that has come out out of the valley and Wing Tai Barrymore is a standout. We shot this on a perfect day at Dollar in the Super Pipe which is the longest 22' pipe in North America. At contests when Tai is about to go, almost everyone stops what they are doing to watch, the pro's included. He goes bigger than anyone. It's like he has a throttle that he can't let go of. When he has a clean run he's unbeatable and he has a powerful style that you just have to sit back and watch." Jeremy Lato in the Sun Valley backcountry during a brief window of light.

"Jeremy Lato is an animal in the mountains. He crushes peaks and is almost impossible to follow he is so strong.  He built his kicker a good hour's hike straight up from the highway. We trekked in the day after he had built it and cleared the landing.  The light was amazing but you could tell that it was not going to last.  So we quickly cleaned up the jump and I got into position for this shot. This was the only jump of the day as the clouds and fog rolled in moments afterwords and we had to pack it in. Jeremy is a coach for the Sun Valley Ski Education Foundation and great guy to have teaching your kids." Pat Lee gaps it out over "bubble world" a local stash that saw a lot of lines last year due to the heavy dense snow.

"I started lugging some serious flashes around last winter to get shots like this where you can illuminate the athlete like its at night but still have deep blues and dramatic contrast in the shot. Pat Lee moved out here from Pittsburgh about 5 or 6 years ago to ride. Pat absolutely crushes it and in this shoot he was lining up massive airs with really tight transitions which this shot highlights. He is another local guy who lives and breathes snowboarding. And he is a blast to hang out with." Smith Optics' Olympic silver medalist and all around heavy hitter Scotty Lago gets blasted out of the Dollar Super Pipe during a catalog shoot for Smith.

"I'm not sure people realize that Smith Optics is based in Sun Valley, but the fact we have the park on Dollar is getting the word out more and more.  They can now bring in their athletes and shoot film and photo here so they brought Scotty Lago to town. We filmed and shot for their web series they have been producing the last few winters called Prospecting Idaho in the backcountry. Then we went over to Dollar and they let us stay up after the hill was closed and groomed so we could get light like this in the pipe. Scotty is amazing and getting to shoot him here was a highlight of the winter for me." 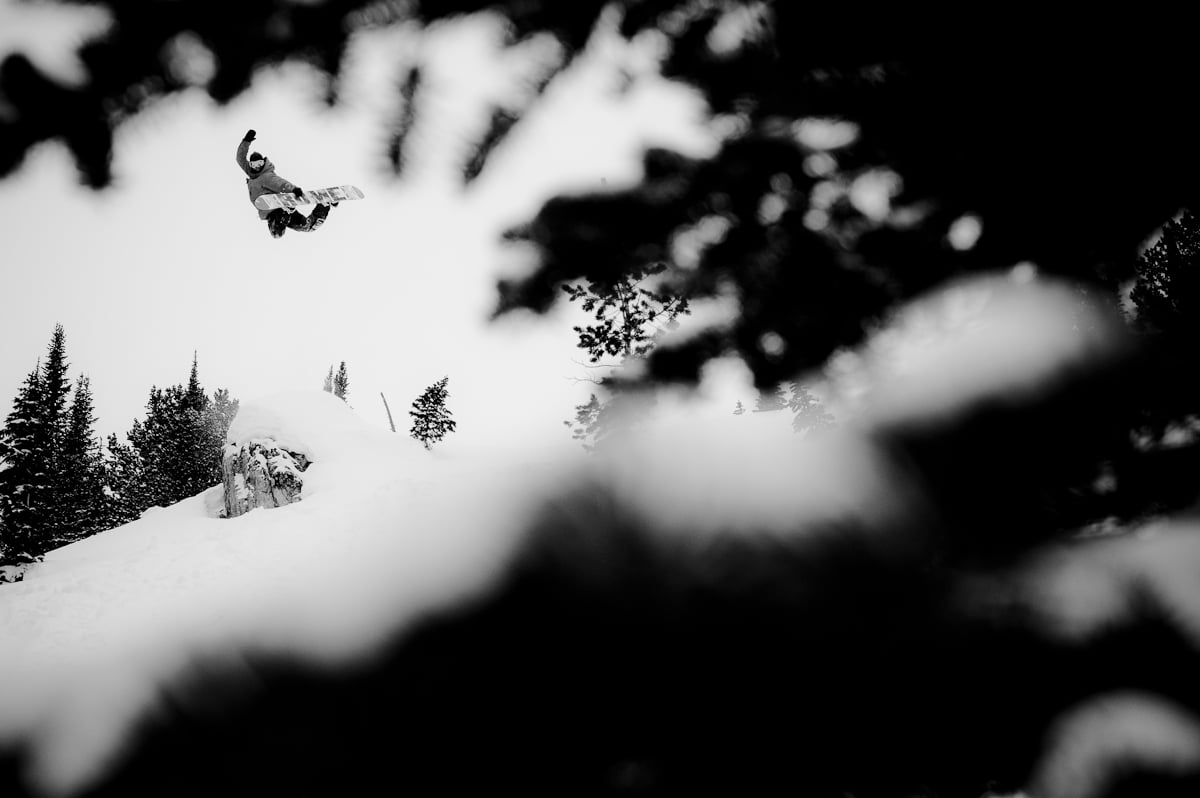 Jeremy Black boosts a big method air in the backcountry in the Smiley Creek zone.

"This was one of those days that as a photographer you just have to really get creative to make something of the effort to get into the hills.  Jeremy and I were out on a day that was so milk bottle white you could hardly keep your balance so I had to pull out the old "hide in the bush trick" and see what I could come up with.  Jeremy grew up here and came home as a result of the park. It's awesome to see all of this talent coming back and elevating the game in Sun Valley. Hi sister Heather also rips and moved back a while ago because of all that was going on here." Wyatt Caldwell slashes through the day into the night in the backcountry.

"Wyatt Caldwell is another incredible local athlete that actually made a professional career in pipe and park without even having one to train on here at home.  He was going around winning all kinds of contests on sheer talent and what little training he could get elsewhere.  He moved to Salt Lake City be closer to the snowboarding world and he moved back home a few years ago home also in part thanks to what has been happening over at Dollar. He has been all over the world as a pro and pays the bills as an arborist which allows him winters to ride everyday. This shot was taken right as the sun was about to pass behind the hill he is coming down and you can see his last two turns in the contrail he is throwing up." This shot about says it all. Wyatt Caldwell supporting the movement for more cowbell.

"There is nowhere like Sun Valley.  We have limitless backcountry and a huge mountain right in town that never has crowds. You never see a lift line unless it's a big powder day or Christmas break and the town is really mellow and filled with cool people who do a lot of interesting things very well. I have a great crew of skiers, snowboarders, mountain bikers and others to shoot and hang out with all of the time. It's been an amazing past few years of shooting for me and I can't wait for it to start snowing again."