Anyone who has stood atop Bald Mountain on a winter day has likely taken in the 360 degree panorama and fantasized skiing one of the hundreds of mountains that dot the horizon.  Five mountain ranges cut the skyline in jagged peaks, and often, I have watched people stand and stare, tracing lines in the sky with their ski pole or gloved finger dreaming.  More often, I have been that person. Earning turns the old fashioned way, one slogging skin track at a time, is how the original skiers to Sun Valley carved their way across the landscape, but today there exists a magic carpet ride to blower pow paradise, Sun Valley Heliskiing.  Occasionally lottery tickets turn up winners, and as luck would have it mine finally came in.  I am going to do the best I can to not sound smug, but when you get it this good, it’s hard not to brag. Standing on top of Baldy with a helicopter about to pick you up, is no doubt a peak experience.

With the Sun Valley Heli crew, safety comes first.  So after a solid briefing by our guides– former World Cup skier and X-Games medalist, Reggie Crist and local veteran guide and hard man, Pat Deal– we burned a couple of chairlift laps on Baldy in the sunshine before the turbo unicorn arrived. Getting picked up off the top of Baldy is not exactly un-auspicious; it’s enough to make you feel like that record you just cut went platinum.  It was a strobing bluebird powder day,an we could not have been more stoked. The Sun Valley Ski Patrol has a quiver of lively avalanche dogs and this little fella got the chance to do a “hot load” for training. This is where the ship is fired up and they practice loading the dog to acclimate him to the noise and experience.

We did a quick training exercise with the Sun Valley Ski Patrol letting them practice loading an avalanche dog into the ship and then got in ourselves. Banking over the summit, we headed across the valley to the Boulder Mountains.  Riding in a helicopter if you’ve never done it, is an experience which defies the laws of nature and is honestly almost more exhilarating than skiing.   Getting dropped off on a narrow ridge at about 10,000′, we did our first fire drill sliding out and covering faces as the rotors washed us with snow crystals and the guides unloaded the gear basket of packs, boards and skis. Chris Templeton fires off the ridge leaving us in silence at 10,000′.

The roar of the engine and whumping of rotors quickly evaporated, and we were instantly standing in dead quiet with 2,000′ of untracked pow right below our toes.  This is what it is all about.  The contrast between the noise of the ship and silence which is left in its wake is the equivalent of the ding of the bell in the boxing ring snapping you into a state of hyper reality. 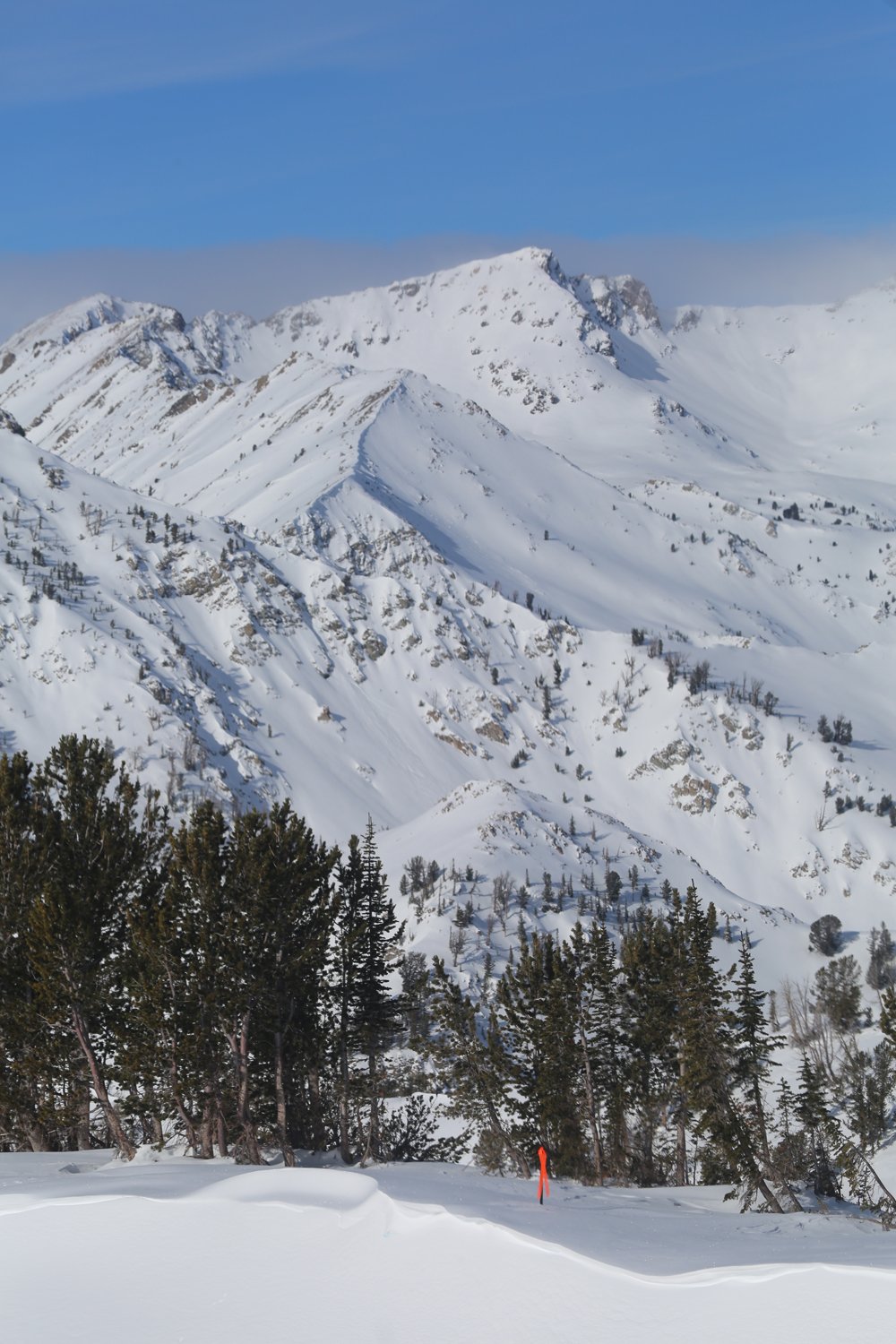 The view from the LZ allowed for much dreaming and scheming.

The sensation of the powder turn pendulum is intoxicating.  It’s a drug so addictive that it’s derailed professional careers, broken up perfectly happy romances, and caused many to trade the good life to live in squalor just to be close to unfettered access to its cerebrum caressing touch.  I’ve never been a skier to make perfectly rhythmic powder turns, instead preferring to careen all over the place and make as much a mess of the mountain as possible.  With the day’s forecast and thousands of acres of untracked pow’, it was a day going completely in my favor.  “Well, boys, we’ve got great stability and the whole range to ourselves so don’t worry about farming your turns.  Just keep my tracks in sight and let ‘er rip!” was the word from Coach Deal. Coach Deal leading it out and letting it rip. Best job in Sun Valley? Check.  That thing hanging next to his arm?  That’s a microphone recording the epical amount of powder blowing past his knees.

We could hear the heli sitting on the ridge below waiting for the next pickup.  Once we would make the LZ, pilot, Chris Templeton who should be called “The Surgeon” for his precision flying, would swoop in and in a matter of minutes we would be headed back to the top, to another aspect for another run. Wall to wall turns and no regrets left at the top.

The high fives came like the clop of stampeding wild horses, and I nearly wore a hole in my glove as we celebrated our good fortune and great turns repeatedly.  For an afternoon we were kings of the roost, living the dream as it were, and getting fresh track after fresh track in such rapid succession that the day flew by. How deep is it out there? How about this deep!? Seriously, this really did happen. Right across the valley from Bald Mtn.

As we whooped and hollered, taken away to a magical landscape, it was hard to believe that just a few miles away, Baldy was running through its day to day routine with skiers and boarders looking over at us pointing to which line they would ski if they had the chance.  Before I knew it we’d burnt up a tank of Jet A and Reggie was calling in Chris for the final pick up of the day.  Julian and Rico had a critical case of perma-grin and my jowels were aching from laughing so much and smiling so hard. Get the radio out of that guy’s hands! Reggie makes the last call of the day. Chris “The Surgeon” Templeton in his office. Alas, all good things must come to an end.  Beers flowed and hot springs were hot tubbed after a glorious day doing about the best thing there is to do on earth.  This much fun is probably illegal in most states, but here in Idaho, it’s an encouraged form of behavior.  Thanks to entire Sun Valley Heli crew for what was without a doubt the best day of skiing I have had in several seasons.  Now when I stand on the top of Baldy I will be able to look across the valley and say, “Yep we’ve skied that.”